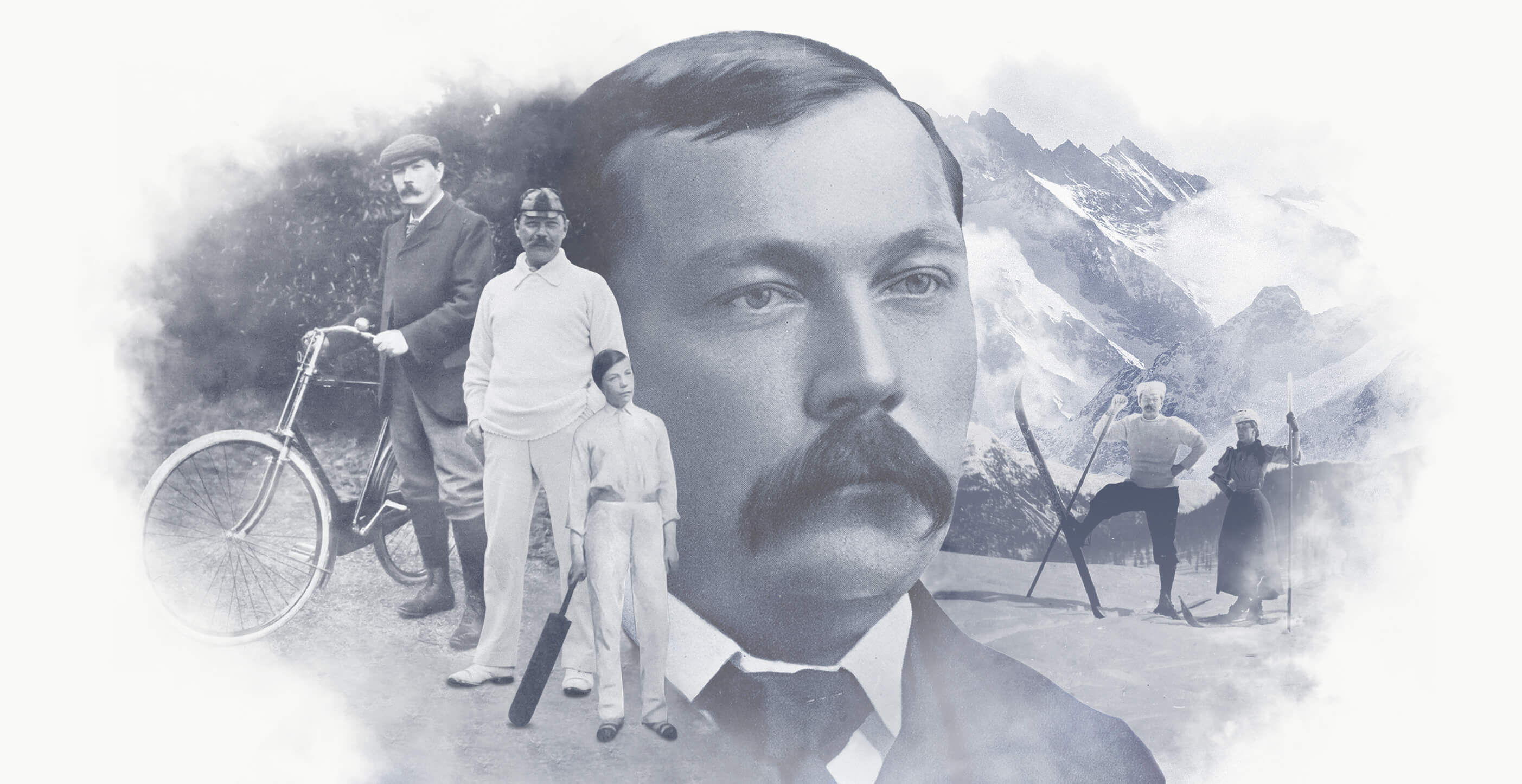 “IMMENSELY POWERFUL
IN BUILD, AND THE
KEENEST OF SPORTSMEN”

“I have never specialised, and have therefore been a second-rater in all things,” said Arthur Conan Doyle of sports in his autobiography Memories and Adventures: “I made up for it by being an all-rounder, and have had, I dare say, as much fun out of sport as many an adept.” So much so, that he devoted an entire chapter there to Sport. From boy-hood on, into his fifties, he played cricket, rugby, football, and other team and individual sports. In Southsea, as a young doctor, he played goalkeeper for the amateur Portsmouth Association Football Club, predecessor to “Pompey,” today’s Portsmouth Football Club. Sports influenced his writing greatly as well, partly in what literary historian Douglas Kerr calls, in his Conan Doyle: Writing, Profession, and Practice, “stories of masculine heroism and adventures in the domains of war, empire, and exploration.”

Sports had a marked effect upon Conan Doyle’s character, breeding sportsmanship, fair play, and respect for one’s opponents in him. At the same time they reinforced some of the national qualities of the Victorian high tide, with Conan Doyle telling his mother— upset when he decided to volunteer for the Boer War at forty—that he felt obligated to set an example because “I have perhaps the strongest influence over young men, especially young athletic sporting men, of anyone in England bar Kipling.”

In his 1914 trip to New York City and Canada he first witnessed baseball games. So taken was he with the game, he introduced his three young children to baseball in 1920.

Baseball with his three young children

During his 1920s trips to the USA, Conan Doyle introduced his three young children to the game of baseball. Daughter Jean and sons Denis and Adrian are seen to be wearing the baseball equipment he bought them.

His favourite past time

When London’s National Sporting Club was founded in 1891, Conan Doyle was one of its first members, excelling in one of its principal activities, boxing. Sports are reflected in all of Conan Doyle’s writings. Sherlock Holmes, Dr. Watson notes in A Study in Scarlet, is “an expert singlestick player, boxer, and swordsman.” Boxing is a sub-theme in his autobiographical novel The Stark Munro Letters, and principal theme of his Regency novel Rodney Stone.

Such was his passion for the sport

Conan Doyle even took boxing gloves with him on the Arctic Whaler, Hope

The Adventure of the Solitary Cyclist

One of his greatest thrills came from once bowling out legendary cricketer W. G. Grace. Sports similes and metaphors litter his writings on virtually all subjects. But what he saw as most important was sports’ moral dimension, its impact upon character: “To give and to take, to accept success modestly and defeat bravely, to fight against odds, to stick to one’s point, to give credit to your enemy and value your friend—“ he wrote in Memories and Adventures: “these are some of the lessons true sport should impart.”

An English amateur cricketer who was important in the development of the sport and is widely considered one of its greatest ever players.

Conan Doyle was once a member of the team

“When the spirits are low, when the day appears dark, when work becomes monotonous, when hope hardly seems worth having, just mount a bicycle and go out for a spin down the road, without thought on anything but the ride you are taking.” - A. Conan Doyle

On a double high wheel bicycle outside their South Norwood home

He was an investor in the company in the 1910s

“Personally I was an enthusiastic, but a very inefficient golfer—a ten at my best, and at my worst outside the pale of all decent handicaps. But surely it is a great testimony to the qualities of a game when a man can be both enthusiastic and inefficient. It is a proof at least that a man plays for the game's sake and not for personal kudos.” - A. Conan Doyle

A keen early motorist although not without incident, he once overturned an early car of his in his driveway at Windlesham with both himself and his brother Innes trapped under it until rescued. Conan Doyle also took part in the Anglo-German Prince Henry Tour.

“Surely billiards is the king of all indoor games”

“Upon one occasion, as I was entering the hall to take part in an amateur billiard competition, I was handed by the attendant a small packet which had been left for me. Upon opening it I found a piece of ordinary green chalk such as is used in billiards. I was amused by the incident, and I put the chalk into my waistcoat pocket and used it during the game. Afterward, I continued to use it until one day, some months later, as I rubbed the tip of my cue the face of the chalk crumbled in, and I found it was hollow. From the recess thus exposed I drew out a small slip of paper with the words ‘From Arsene Lupin to Sherlock Holmes’. ” - A. Conan Doyle

“Getting as near to flying as any earth-bound man can”

“There is one form of sport in which I have, I think, been able to do some practical good, for I can claim to have been the first to introduce skis into the Grisons division of Switzerland, or at least to demonstrate their practical utility as a means of getting across in winter from one valley to another.” - A. Conan Doyle

Taking a welcome break from the slopes with his sister