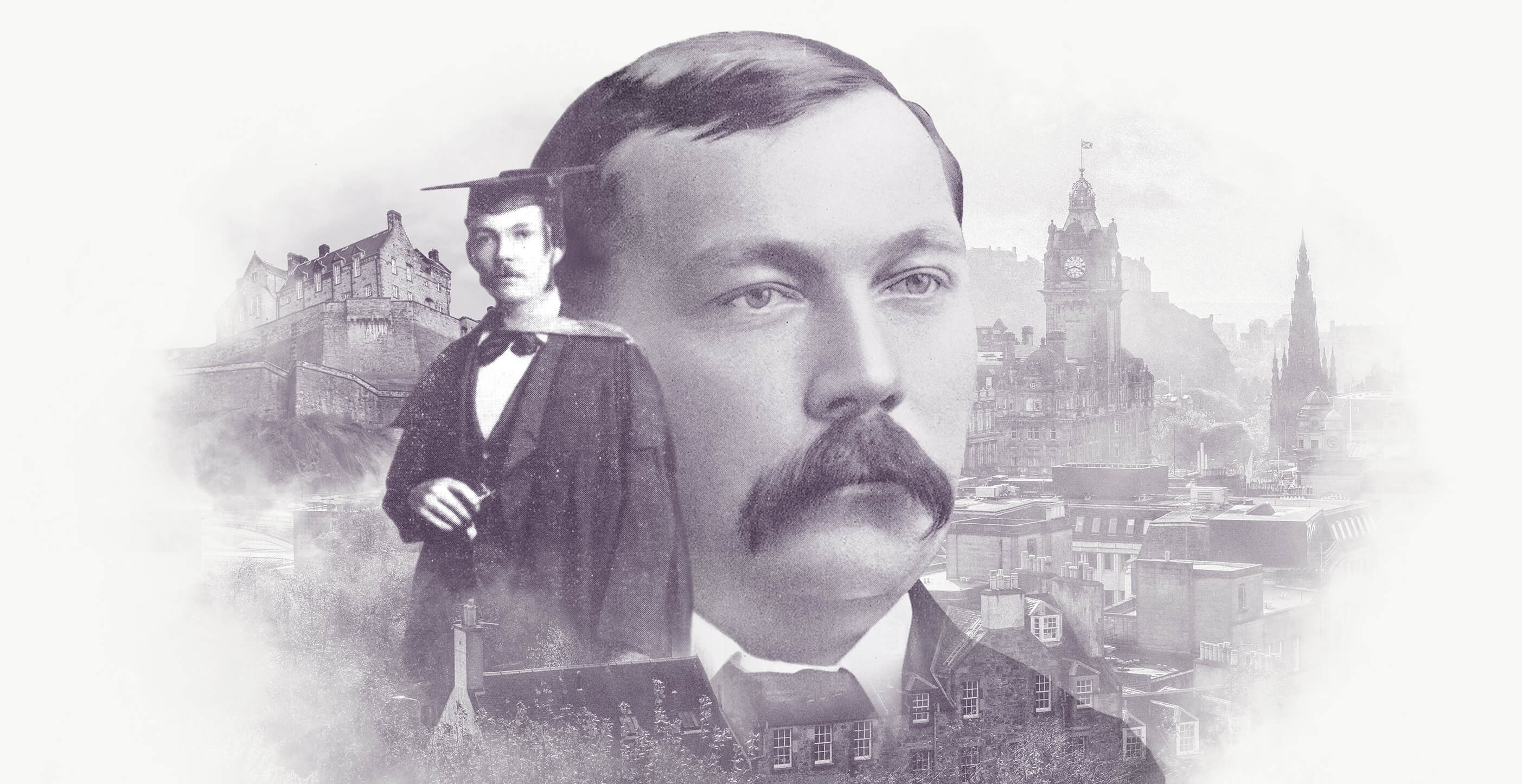 Arthur Conan Doyle, native to Edinburgh, Scotland, returned from school abroad at the age of seventeen to enter Edinburgh University’s medical school, perhaps Europe’s foremost at the time. He received his M.B.C.M. degree (Bachelor of Medicine and Master of Surgery) in 1880, and his full M.D. degree in 1885 with the completion of a dissertation on tabes dorsalis.

After a stint as a ship’s physician and a short-lived period in Plymouth, in 1882 he started a practice of his own as a general practitioner in the Southsea suburb of Portsmouth—where he compensated for its slow start and growth by writing stories at the same time.

On the deck of the Arctic exploration vessel, Leigh Smith's Eira, which they encountered in the far north that July. Conan Doyle is in the middle, surrounded by officers from both ships - his own captain, John Gray, fourth from left. Leigh Smith is second from left.

He became a leading member of the Portsmouth Literary & Scientific Society, a broadening experience which by 1890 helped him decide to specialize in ophthalmology, and move on. After several months advanced study in Vienna and Paris, he opened a new practice in London in 1891 continuing to write all the while, in what he called his all too abundant free time. That summer, the overnight success of his first Sherlock Holmes short stories, in the new periodical The Strand Magazine, convinced him to give up medicine for writing. At the same time, his medical education and experience strongly influenced his writing—not least his Sherlock Holmes stories, which are narrated by an M.D., Dr. John Watson, and with Holmes based upon principles of observation and deduction that Conan Doyle had learned as a medical student from Dr. Joseph Bell of Edinburgh. (Indeed, Holmes and Watson met for the first time in the pathology laboratory of St. Bartholomew’s Hospital in London!)

Part one
A letter from Conan Doyle's little brother to their Mother, August 16th 1889

I was so delighted with the bow and arrows you sent me. Tomorrow I am going to see a cricket match between the Australians and the Cambridge University. Please write and tell the chickens that I can not send their parcel quite yet but I will in a week or two. The patients are crowding in.

We have made three bob this week. We have vaccinated a baby and got hold of a man with consumption, and to-day a gypsy's cart came up to the door... ”

“ ...selling baskets and chairs. So we were determined not to let the man ring as long as he liked to ring. After he had rang two or three times Arthur yelled out at the pitch of his voice: "Go away". But the man rang again so I went down to the door and pulled open the letter box and cried out: "go away". Then the man began to swear at me and say that he wanted to see Arthur. All this time Arthur thought that the door was open and was yelling: "Shut that door". Then I came upstairs and told Arthur what the man had said. So Arthur went down and opened the door and we found out that the gypsy's child had measles. Jimmy who was in bed almost laughed his head off and after all we got sixpence out of them and that is always something. ”

Now I must say good bye, ever your loving son.

A man of mind & matter

And in 1900, when the Second Boer War broke out, Conan Doyle returned to medicine to spend six months in South Africa as a volunteer field army surgeon. In 1912, when his oldest son Kingsley was a medical student himself at St. Mary’s Hospital, London, Conan Doyle spoke to its students and faculty on “The Romance of Medicine,” telling them that medicine “tinges the whole philosophy of life and furnishes the whole basis of thought.” (And “To the man who has mastered Grey’s Anatomy, life holds no further terrors.”) “Though I am of the medical profession, I am not in it,” he concluded, “but I can testify how great a privilege and how valuable a possession it is to be a medical man, and to have had a medical training.”

A letter from Switzerland, September 30th 1895

Will you allow me through your columns to warn your readers against a book called "Strange Secrets," which is being sold with my name upon the cover. Out of a large number of stories, only one is mine — a very short one in the middle of the book.

When the Boer War broke out in South Africa the American Ladies Hospital Ship Society were offered the ship for use as a floating hospital, led by Winston Churchill's mother Jennie.